Thread Heads Episode #1: Let’s Get This Show On The Road 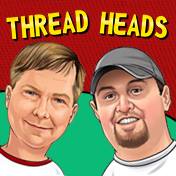 What happens when you put two patch collectors on a webcam video hangout and get them talking about collecting patches? That’s the premise behind this new thirty minute weekly show that we are calling Thread Heads. Every week we are going to publish a show with segments that are both informational and educational for people in the Boy Scout memorabilia hobby.

The first episode includes an explanation of the show concept and an introduction to the hosts. For the beginning collector we have a segment on how to store your patches. Brad is a hard core Facebook patch trader and he leads the focus topic for this show on how to trade patches on FB. The mail bag segment has each host showing off some cool stuff they acquired recently including Jason sporting some vintage Scouting hats. As the eBay Powerseller in the group Jason then gives up a trade secret in this show’s eBay ninja trick.

Please leave comments below if you have suggestions for future shows and topics we should hit upon. We are also looking for people with a webcam that would be willing to come on as a virtual guest. Brad England is scheduling everything and you can email him at if you want to be a guest at bgengland@gmail.com.