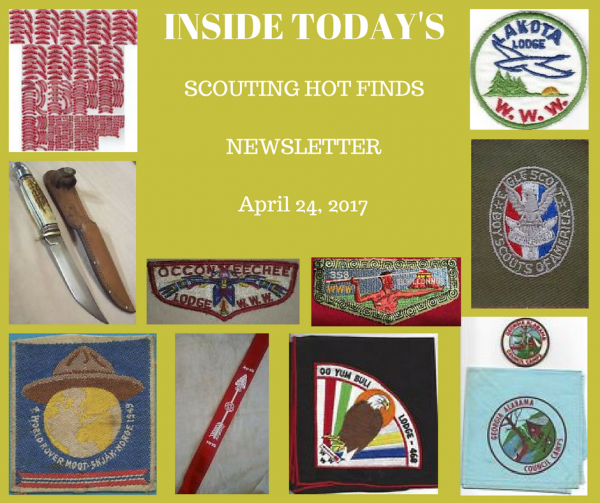 The patch trading report for the weekend reveals two universal truths that we all will do to remember. Remember to order your patches early is the first one. Nayawin Rar Lodge 296 didn’t and the probably 1,000+ flaps they made for the event to trade and collect won’t arrive until after everybody is home from the event. The poor guys from the Nighthawk lodge had nothing to trade other than a simple pair of epaulets that they wore as a spirit item.

Speaking of spirit items this one totally caught me off guard. Maybe this is a very micro focused thing but several lodges produce specialized epaulets for the event and these have now become collectible. In fact for Occoneechee 104 if you wanted to have the full set it probably includes the nicely embroidered epaulets and maybe the button which many people probably don’t collect.

The 2nd universal lesson is don’t plan the biggest conclave in the country and forget to put patch trading on the schedule. We all showed up Friday and not only was patch trading not on the schedule the shelter that for years had housed this event was full of boxes for a service project. Literally all of us were standing around with the rain threatening and no place to put down a blanket and trade a patch. I think I managed 6 trades total Friday night. Things improved Saturday afternoon but that gave a lot of guys heartburn.

Going back to a theme from earlier in the week – bringing up the next generation. For much of the weekend I had an apprentice sitting behind my table who is going to be at the Jamboree. I joke that Ron King should have been signing sashes as he was part of the contingent that delivered the report to Congress this year. During the aftermath of Hurricane Matthew Ron helped organize Scout volunteers from local troops to assist in relief totaling hundreds of man hours. Hopefully at the Jamboree he’ll be ready for the patch madness after listening to me all weekend and helping me trade.

CLICK HERE TO OPEN THE APRIL 23, 2017 ISSUE OF THE SCOUTING HOT FINDS NEWSLETTER